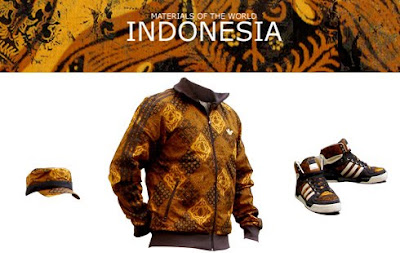 Batik (Javanese pronunciation: [ˈbate?]; Indonesian pronunciation: [ˈbaːtik]; English: /ˈbætɪk/ or /bəˈtiːk/) is a cloth that traditionally uses a manual wax-resist dyeing technique. Due to modern advances in the textile industry, the term has been extended to include fabrics that incorporate traditional batik patterns even if they are not produced using the wax-resist dyeing techniques. Silk batik is especially popular.

Etymology: Although the word's origin is Javanese, its etymology may be either from the Javanese amba ('to write') and titik ('dot' or 'point'), or constructed from a hypothetical Proto-Austronesian root *beCík, meaning 'to tattoo' from the use of a needle in the process. The word is first recorded in English in the Encyclopædia Britannica of 1880, in which it is spelled battik. It is attested in the Indonesian Archipelago during the Dutch colonial period in various forms: mbatek, mbatik, batek and batik. 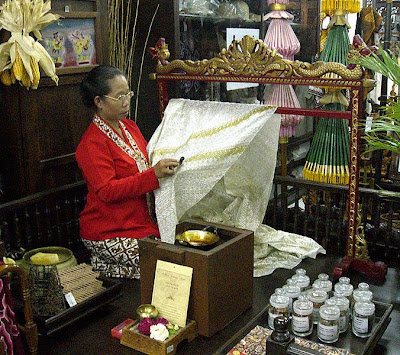 Javanese traditional batik, especially from Yogyakarta and Surakarta, has special meanings rooted to the Javanese conceptualization of the universe. Traditional colours include indigo, dark brown, and white. This is related to the fact that natural dyes are only available in indigo and brown. Certain patterns can only be worn by nobility; traditionally, wider stripes or wavy lines of greater width indicated higher rank. Consequently, during Javanese ceremonies, one could determine the royal lineage of a person by the cloth he or she was wearing.

Other regions of Indonesia have their own unique patterns that normally take themes from everyday lives, incorporating patterns such as flowers, nature, animals, folklore or people. The colours of pesisir batik, from the coastal cities of northern Java, is especially vibrant, and it absorbs influence from the Javanese, Arab, Chinese and Dutch culture. In the colonial times pesisir batik was a favorite of the Peranakan Chinese, Dutch and Eurasians.

History: In Java, Indonesia, batik predates written records. GP. Rouffaer argues that the technique might have been introduced during the 6th or 7th century from India or Sri Lanka. On the other hand, JLA. Brandes (a Dutch archeologist) and F.A. Sutjipto (an Indonesian archeologist) believe Indonesian batik is a native tradition, regions such as Toraja, Flores, Halmahera, and Papua, which were not directly influenced by Hinduism and have an old age tradition of batik making.

In Europe, the technique is described for the first time in the History of Java, published in London in 1817 by Sir Thomas Stamford Raffles who had been a British governor for the island. In 1873 the Dutch merchant Van Rijckevorsel gave the pieces he collected during a trip to Indonesia to the ethnographic museum in Rotterdam. Today Tropenmuseum housed the biggest collection of Indonesian batik in the Netherlands. The Dutch were active in developing batik in the colonial era, they introduced new innovations and prints. And it was indeed starting from the early 19th century that the art of batik really grew finer and reached its golden period. Exposed to the Exposition Universelle at Paris in 1900, the Indonesian batik impressed the public and the artisans. After the independence of Indonesia and the decline of the Dutch textile industry, the Dutch batik production was lost, the Gemeentemuseum, Den Haag contains artifacts from that era.

Due globalization and industrialization, which introduced automated techniques, new breeds of batik, known as batik cap (IPA: [tʃap]) and batik print emerged, and the traditional batik, which incorporates the hand written wax-resist dyeing technique is known now as batik tulis (lit: 'Written Batik'). At the same time Indonesian immigrants to the world brought Indonesian batik with them. 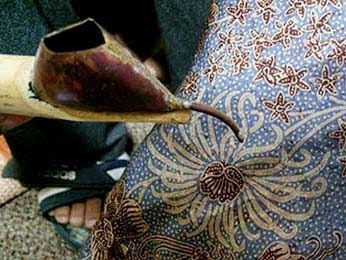 UNESCO designated Indonesian batik as a Masterpiece of Oral and Intangible Heritage of Humanity on October 2, 2009. As part of the acknowledgment, UNESCO insisted that Indonesia preserve their heritage.

The pride of Indonesians to wear batik till the present day has preserve this art of textile. The beauty of Batik is a tribute to the patience, creativity of the woman of Java, the main island of Indonesia. Credit should be also given to men who prepare the cloth and handle the dyeing and finishing process.

Batik is generally thought of as the most quintessentially Indonesian textile. Motifs of flowers, twinning plants, leaves buds, flowers, birds, butterflies, fish, insects and geometric forms are rich in symbolic association and variety; there are about three thousand recorded batik patterns.(*)
Posted by Rumah Batik Noeza at 9:29 PM No comments: